So Damien, please give our readers a short intro into you and your life!

I grew up in Perth, Western Australia. At an early age I was absolutely sports-obsessed, particularly Australian Football, or AFL as it's called. I took this quite seriously until my late teens when I accumulated a few too many serious injuries. I went on to get a degree at Curtin University and have worked in the Oil and Gas Industry for over a decade, taking up surfing and other slightly less high-impact sports after football.

These days I am more passionate about sports from the couch, but am a keen boxer, and have recently become a very, very lucky father during 2020. So, between that and having my first two books published, there have been a lot of positive things going on at the same time as this pandemic.

Was the choice to write and create an extensive fantasy world something that came naturally or was it the product of detailed discussion?

Oh it came incredibly naturally. I can’t speak for all authors but I think one of the great motivations to write a fantasy universe; is to have enough fascination with the genre, that eventually you end up lying awake at night imagining the perfect motivation for your own universe.

Little bits and pieces from other stories that I loved, while strengthening some of the key elements that I feel none of them quite had enough of. For me it was the need for a strategy against the odds, to overcome the great good vs evil dilemma.

What renowned authors have been a great inspiration in your life, which of them influenced you to begin this journey?

Absolutely Tolkien. The Hobbit, The Lord of the Rings were my first introduction to fantasy and from there I sought out lots of similar authors. I enjoyed the Wheel of Time, The Belgariad, Eragon, and recently George R. Martin’s work, but really it felt like most fantasy originated after Tolkien created his works.
I think that; Tolkien’s brilliance, mixed with Martin’s ability to write in a style and language that resonates so well in the modern day, along with the fact that Christopher Paolini was so young when he wrote Eragon, all combined together to give me to motivation to write my own story.

What piece of advice would you give to young and aspiring authors that are slowly starting their journey?

If you are passionate enough about an idea, start writing it down. Do it fast at first, even if it’s full of errors. Then once you’ve gotten all of those ideas onto a document, back them up (I send myself emails), and then have a good hard think about how you intend to deviate from just copying what is already out there. After that, make sure you consistently add to your work until it is finished.

How much has your background and life experience influenced the creation of this fantasy series?

Massively, but unless you are really close to me you will probably never really know where those influences have found their way into my work. If it’s blatant, then it's not derivative, if it's subtle, you probably won’t know why it’s there. But some of my most influential life experiences have trickled into the tiniest details in my books. The caveat I have to people I have met, is that a personality trait here and there has been added to characters, but never the whole character, so that makes it hard to tell people in case they took offence at some of the additional characteristics I gave to a person influenced by them, characteristics that have nothing to do with them.

How has your relationship with the relatively new publishing company (SkyGoat Publishing) started?

SkyGoat Publishing was a great concept that came about during the Corona virus pandemic. I had shared my drafts with a few people close to me, who at the same time were inspired to begin an indie publishing house. From there my novels began the introduction for SkyGoat Publishing House, with the intention of slowly expanding at a sustainable pace by taking on other authors.

Has the Journey so far been how you imagined it before the first book ( The Hero of Aridhold) ?

Probably not quite. I think every author initially pictures themselves signing onto the largest publishing company in the world that THEY would most prefer to work with, the moment they finish their first manuscript. That doesn’t happen.
The reality has been far more rewarding though. Realising that the first draft of my manuscript was completely unacceptable from a quality standpoint was a good eye-opener, that getting to the stage I have reached now requires an insane amount of hard work, mostly in editing, and editing. As well as a few other things and then lots of editing.

2020 has been hard on all of us, however you reached a big milestone in the form of publishing a book, how was the year for you ?

Pretty positive in that I made the most of the unique opportunity that 2020 created, especially during the initial lock-down. It has been one of the busiest years of my life and one of the best years, but at the same time it has had some of the worst challenges going on in the background at the same time as all the positive silver linings that I found from it.

I’m very big on silver linings, most events have them if you look closely at what you can do about any situation you find yourself in.

For those that still need convincing to buy your book, would you like to give us a short teaser?

Well as I alluded to, my universe has what I always felt needed to be covered more comprehensively in the fantasy stories I loved. That is; rather than the behind the scenes adventure designed to “Snatch victory from the jaws of defeat… at the eleventh hour” I wanted to create a world that required a grind, a big come-from-behind narrative that required the hard work rather than the special magic trick, or last minute event, that saves everyone despite losing abysmally.

Incase that doesn’t tell you a little more about me, I grew up insanely competitive. So I would never have wanted to win a game of AFL by catching a golden snitch with a minute to go when we were six goals down. I usually liked to start the comeback by half-time at the very latest and then will myself over the line.

I think that is what is uniquely part of the narrative for my universe. That and the fact that it is uniquely Australian fantasy. There are easter-eggs from start-to-finish that represent Australia. If you’re Australian you will see it in every single chapter, if you’re not, you probably still could find a few of them ;) I’d love to hear from anybody who does!

If there is anyone who would like to get a hold of Damien's books, here is where you can get them: SKYGOAT PUBLISHING 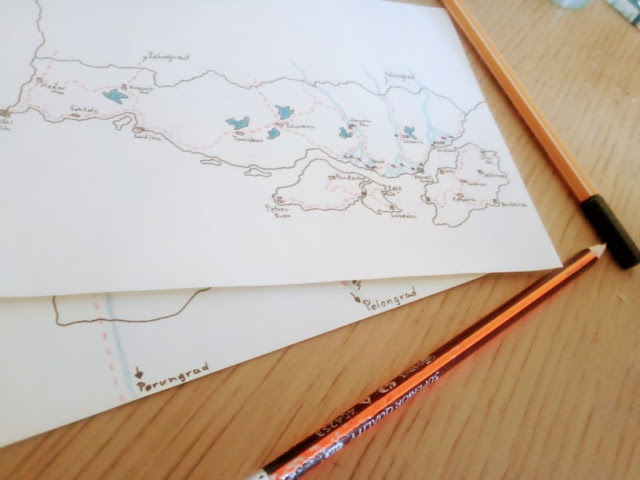